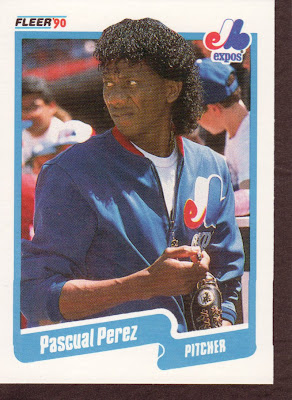 Players: Pascual and Melido Perez
Cards: 1990 Fleer #358, 1990 Donruss #BC-13
Errors: Since his hair is unable to be contained by MLB hat, Pascual has also chosen to wear standard-issue white T and a jacket sized for little leaguer. Furthermore, he steals pens.
According to numbering, Melido's no hitter took place 13 years before the birth of Jesus. Also, apparently the 1990 baseball season contained no highlights greater than a rain-shortened 6-inning no hitter.
Comments: Attention. Ahem. Attention. Graduates, please. Take your seats. Sir! That squirt gun will be confiscated!
I'd like to welcome you all to the 2008 Uglee Cards Salute!...to hair graduation ceremony. It's been a long month and there were trying times. I can only thank Vidal Sassoon that we didn't see Jeff Parrett's chest hair. 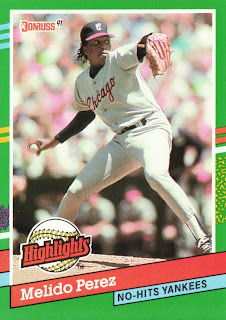 We've gathered here today to honor all of you: Dave. Steve. Dickie. What you accomplished on the field is surpassed only by the vociferous hair-related endorsement contracts you have earned.
All we can say is: Thank you.
To honor your work, we've invited two very important people to this afternoon's ceremony.
They come to us straight from the Dominican Republic's House of Style.
Of course, they are brothers to each other. But I think during this long month they have also become brothers to much of the staff here. I know just the other day Dr. Ashburn remarked: "I'd no sooner jab a pen in his side than my own brother."
So, before they deliver their synchronized commencement addresses, I'd like to say a few words about Pascual and Melido Perez. And their hair.
Pascual, your scowl at fans stupefied and dumbfounded us at first. We wanted to ask: why the hatred while you're writing a number on your glove? But, as fast as we could ask, you'd answer: "This is not even my glove."
Well, done sir. Well done. You are so wise. Your hanging hair of Bablyon has given you many brain muscles.
Melido, your flowing, but somewhat sticky, locks dazzled the Yankees for six hitless innings. We can only imagine the various illegal substances you hid in plain sight, causing the ball to dip, dive and curve with a well-groomed panache.
Although the official scorers later disqualified your feat, you can be sure you've earned a place in our hearts, and hopefully the alumni donation book.
So, without further ado, on this beautiful and historic day, I present Melido and Pascual Perez.
Wild applause...
Scoring: 5-4-2
Posted by Uglee Card at 12:00 PM 1 comment:

live from the rusty spikes 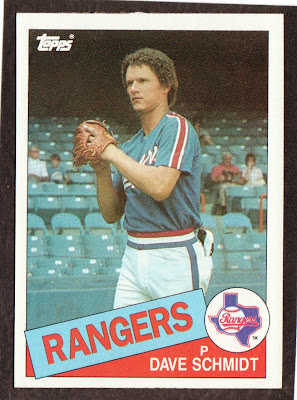 Player: Dave Schmidt
Card: 1985 Topps #313
Errors: Pants are slowly swallowing player - hat is already partially digested. Two of the fans at the game passed away before first pitch. Photo was taken shortly before player was hoisted up the flag pole for Star Spangled Banner.
Comments: Hey, welcome to the Rusty Spikes. I’m Johnny. Thank you, thank you. The regularly scheduled stand-up comedian was, uh, suddenly taken ill. He’s been vomiting all day. Really terrible, awful stuff. Nasty. But that’s not the worst news. The worst news is you're still in the audience!
Whoa! Seriously. Whoa!
OK, we’re all here to raise a little money for Uglee Card’s 2008 Salute! … to hair. And hey, what’s with this Uglee Card anyway? Can’t this guy write something normal? Why’s it always gotta be some exotic fish recipe or shampoo instructions or B-movie script? So the player’s a tubbo. Just say it already! Enough with the obtusity!
Am I right? Hello? Anybody there? Whoa!
Anyhow, all right. So we got this Dave Schmidt. What’s not to like about this guy? I gotta say: maybe he took the Bring Your Chia Pet To The Park promotion a little too seriously, right? Whoa!
I mean, is that a jheri curl? Did he accidentally start using Gary Ward's locker? Maybe he was Charlie Houghing some paint in the back. Do you feel me? Whoa!
That’s not right. That’s just not right!
Hey, Schmidt - the drum major from the Get Along Gang Marching Band called. He wants his pants back! Whoa! Is there a pantless clown running around? Whoa!
Am I right? Is this mic working? Or is the audience broken? Whoa!
Hey, I don’t come to your work and fall asleep, do I? Whoa!
And Dave Schmidt, buddy, I gotta say it. Wonder Woman’s missing her belt. What’s the story there, right? Whoa! Hey!
OK, OK, you’ve been great. Just kidding - you were terrible. I was amazing! Whoa!
Scoring: 7-5-2
Posted by Uglee Card at 12:00 PM 1 comment: 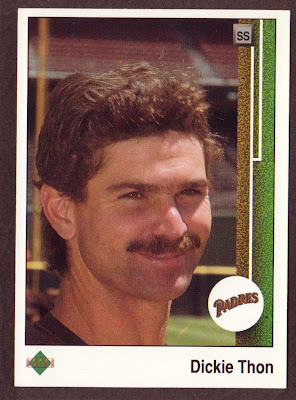 Player: Dickie Thon
Card: 1989 Upper Deck #258
Errors: Apparently still on MLB probation, player was not issued team hat. Player showed up to stadium on wrong day or wrong city - discovered park empty.
Comments: We join this week’s Uglee Card's 2008 Salute!…to hair criminal trial, already in progress...Let's listen in...
Fancy lawyer man: Your honor, I object! Arguing facts not in evidence! At no point has anyone presented even a single shred of testimony that my client was sleeping directly before he arrived at the ballpark.
In fact, Mr. Thon’s wife testified that my client spent most of the morning in question grooming his expansive, luxurious mustache and eyebrows.
If my esteemed opponent wants to prove a charge of aggravated bed head, she knows that state statute requires hair intent. Her conduct is totally unprofessional.
Fancy lawyer woman: Well, your honor, I object to that characterization!
He knows I have latitude in my cross examination. I think my opponent has gone out of his way to show that his client’s scruffy, disheveled faux-beard is part of a “style.” I’m trying to show that this is more than a case of negligent hat hair. This hair has been teased!
Anyhow, I have a right to question the witness once he takes the stand.
Judge in bathrobe: Thank you, counsel and counsel. I’ll take both your arguments into consideration. But first, I’d like to ask the cat on Mr. Thon’s head a few questions.
Thon’s head: Meow.
Judge in bathrobe: Case closed!
Scoring: F8
Posted by Uglee Card at 12:00 PM 1 comment:

flow it, show it, long as god can grow it 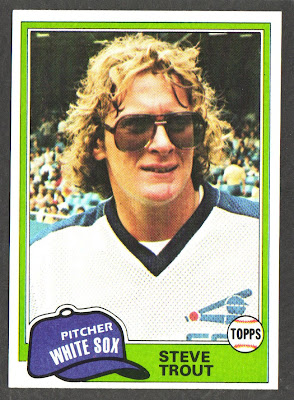 Player: Steve Trout
Card: 1981 Topps #552
Errors: Player may have caught Tom Henke Disease. Despite Major League pedigree, player has rookie-ball haircut. At least one fan (right, in yellow) decided to flee stadium rather than face hair/eyewear combo.
Comments: Welcome to Uglee Card's 2008 Salute!...to hair.
This month we will be celebrating the Hairy Scarys of MLB.
Making fun of a guy's height, his nose, his parents? Not cool. There's nothing he could do about that stuff; he was born into it.
But we can all go to the barber. Or, at least, lend our sister a pair of scissors.
Because when you make it to The Show, it's time for a Major League Buzz.
But Steve Trout never had a Crash Davis to teach him that. Instead, we're left with this candid picture, captured as Steve watched a hot dog vendor fall from the upper deck. In this graphic image, you can see all Trout's hair-related emotions: The embarrassment. The shame. The horror.
Or...um...at least you could see those feelings in his eyes. You know, if he wasn't wearing high-tech Sun Blocker 6000 glasses.
Well, 1981 Steve Trout, we here at Uglee Card salute you.
You are hereby awarded our first annual honorary: "Dave Coulier Shaggy Dog 'Do" Plaque. Wear it with pride, buddy.
Scoring: FO2
Posted by Uglee Card at 12:00 PM 7 comments: