there ought to be clowns 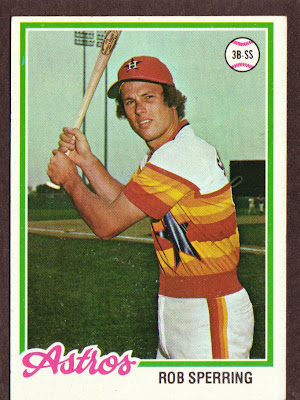 To director of scouting/concession manager:
I don’t have to tell you that times are tough. The challenge for every Major League club is to fill a roster with individuals who can perform many roles without breaking the bank.
I believe I am in a unique position to help your squad. I am contacting you to offer my services as either a solid hitter with experience in both the infield and outfield, or as a clown to entertain children at your stadium.
As a player, I have logged four consecutive Major League seasons with more than 21 hits. During that time, I have played five different positions, with my specialties being shortstop and third base. The highlight for my career so far was Aug. 11, 1974 - my Major League debut - when I homered and doubled. After that day, I was sure I wanted to be a big league ballplayer. Or, if that was not possible, a clown.
My experience in the world of clowning took off this past year as I perfected my signature character: Ty Clown, the friendly baseball clown. As Ty Clown, I wear a goofy shirt, a large orange belt, comical pants and curly red hair. I have a regular routine of kid-friendly baseball jokes (Why did Lou Brock go to jail? For stealing bases!) and I am skilled at creating more than 15 balloon “animals” including: cat, dog, pony, octopus, giraffe, snake, worm, Ted Williams, Hank Aaron, tiger, blue jay, (Cubbie) bear, angel, crown (for Royals) and - for an extra fee - the Houston Astrodome.
You may have read media accounts about the June incident in Cincinnati where I became confused and used my bat during Gene Woodling’s fifth birthday. I want to assure you that was a one-time event. At the time, I had just begun taking a new medication, which caused me some hallucinations. Since then, with the help of a doctor and the support of my family, we have not had any recurrences. Not only does my settlement with the Woodling family not stop me from performing, it is actually part of my motivation to stay out there and earn money to pay my enormous legal fees.
I can provide references for both by baseball skills and clown appearances upon request.
I thank you for this opportunity to introduce myself. I look forward to meeting with you to talk more about what I could bring to the team in the position of infielder/entertainer.
Sincerely,
Rob Sperring
Scoring: 9-2
Posted by Uglee Card at 12:00 PM 6 comments: 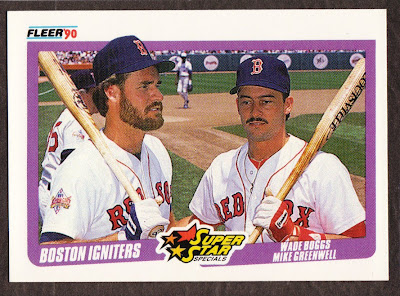 Player: Wade Boggs and Mike Greenwell
Card: 1990 Fleer #632
Errors: Card advertises “Super Star Specials”, yet has Mike Greenwell on it. Look closely - where is Greenwell’s right hand going? Both players coordinated undershirts with batting gloves, which is very cool.
Comments: Mike Greenwell tried to review the events of that day, searching for the moment where it all went wrong.
It had started so innocently.
On a sweltering August night, the Sox had swept a double header from the front-running Orioles. Boston was finally over .500, and within a game of first. Anything seems possible on a night like that.
“Let’s go throw some knives,” Boggs said, as he put on his street clothes.
That was probably when the night changed. That seemed so clear to Greenwell, looking back. But then again, he was a new man now. He had seen so much horror.
Boggs took the collection of knives out of his locker.
"Let's go over to Nick's Place," Boggs suggested.
Within an hour, Greenwell found himself in an alley behind a bar owned by first baseman Nick Esasky, tossing knives with Orioles catcher Mickey Tettleton and Boggs. The high of the double-header was still ringing in Greenwell’s ears. The knives flew like sparrows toward a struggling worm. The booze flowed even faster.
And so it didn’t seem strange when the dares started.
First, Boggs challenged Tettleton to taunt a bear at the Boston Public Zoo. Tettleton did it. He nearly lost a hand, but he did it.
Then Tettleton dared Boggs to stick-up a cabbie. Once Boggs had tossed the driver into the street, all three men piled in.
“Your turn,” Boggs said, turning toward Greenwell. “I dare you to burn down the Boston Tea Party ship.”
Through the long cab ride across town, the men talked about where to get matches, gasoline. Even then, it seemed like a joke - a laugh. Surely, something would intercept them before they could do any real damage. But Boggs was driving at fantastic speeds, and suddenly they were there, on the Congress Street Bridge.
Was it the crazy look in Boggs’ eyes? Was it Tettleton’s constant goading? Why hadn’t Greenwell turned back?
For years, Greenwell had admired Boggs' hitting, his facial hair. Greenwell would look at his own paltry mustache with disgust. Why couldn't he grow a beard?
Later, Greenwell would try to convince himself he had no choice. It was the Boston Tea Party ship or him. But even he didn't believe that. As he lit the first match, Greenwell knew: he was the true monster.
The next morning, Greenwell looked for a place where no one would recognize him. In the ensuing chaos, he had fled the scene. He had avoided any of his teammates the rest of that night, rode alone to Fenway. When he got there, Greenwell scanned the stands. Every fan in sunglasses seemed like a Fed who knew his secret.
Greenwell trudged back to the dugout.
There was Boggs. As he finished off a leg of chicken, there was no indication Boggs was thinking about the ship. Greenwell could think of nothing else.
“Boggsy, Greenie, how about a picture for the press?” yelled a Boston Herald photographer.
Greenwell looked up. The two men shuffled toward each other.
“C’mon guys,” Johnny Newspaper continued. “A little closer together. Let’s make this for A1. I can see the headline now: Boston Igniters.”
Why did he say that?
Neither Greenwell nor Boggs made eye contact. They couldn’t. There would always be too much between them.
The photographer's camera snapped.
Scoring: FO3
Posted by Uglee Card at 12:00 PM 4 comments:

there once was a pitcher in new york 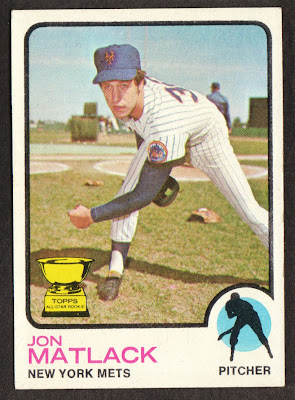 Player: Jon Matlack
Card: 1973 Topps #55
Errors: Player reached for the Golden Chalice of Topps All-Star Rookie-ness, but failed to grasp it. Player has batting-coach-shaped tumor growing out of left butt cheek-al region. Player may have laid two glove-shaped eggs on the field. Simon says touch right elbow to left knee - you too shadow player in the corner!
Comments:
OFFICIAL RESULTS - Bethpage Limerick Contest
Bronze medal ($5 gift card to Carvel)
Joe Christopher, Kramer Lane Elementary
There once was pitcher from West Chester P-A,
He threw for the Mets every fifth day.
But in between starts,
He had really bad farts.
And used his blue glove to subtly fan them away.
Judge’s notes: Good form, questionable use of ‘farts’, good rhyming.
Silver Medal (Two weekday passes to Science Museum of Long Island)
Rick Herrscher, Charles Campagne Elementary
Jon Matlack only pitched from the grass,
And his teammates thought this was a gas,
Until the manger stepped in,
And said with a grin,
If you do that again, I’ll kick your rear.
Judge's notes: Teacher’s editing of the poem cleans up improper language, but takes away some rhyming. Overall, nice effort.
Gold Medal (Family pass to Old Bethpage Restoration Village, plus $15 in Bethpage bucks)
Sammy Drake, John F. Kennedy Elementary
Jon Matlack was impossible to hit,
His mound tricks gave each batter a fit.
But one stunt truly shocked,
If his colon wasn’t blocked.
Matlack leaned over and pooped out a mitt.
Judge's notes: We are concerned about the number of entries that discuss bodily functions. Still, this entrant shows a mastery of the a-a-b-b-a structure of the classic limerick. Bravo!
Scoring: 8-5
Posted by Uglee Card at 12:00 PM 2 comments:

a coat of harms 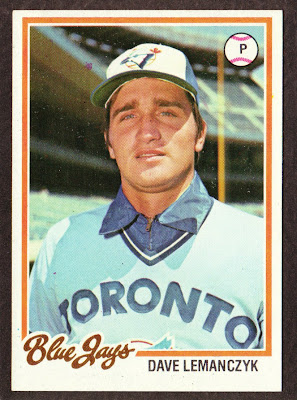 Player: Dave Lemanczyk
Card: 1978 Topps #33
Errors: Player is sporting the extremely fierce and intimidating baby blue, iron-on Jays uniform. Was it cold on picture day? He paused and a brief shadow crossed his face as he considered his own mortality.
Comments:
Dearest mothur and fathur!
When or if you find this Ill alreedy be gone. I can’t say where I am but its probably passed the corner. Maybe all the way to Coach Hartsfields house. I can’t say! (DON’T LOOk at Coach Hartsfields house, or in his backyard.)
As punichment for being the wurst parents of all time you’ll probubly never see me agian! I hope your happy! YOU MADE ME SOOOO MAD!!!
It’s not fare! I told you that it was a bright sunny day out. All the other players got to where there regular uniforms! Jerry Garvin + Steve Staggs + EVEN PHIL ROOF WHO NEVER PLAYS all woar the regular uniforms. But Mom kept saying it was too cold even tho there was no fans and it was very very very very very sunny. And Dad said zip it all the way up even tho I threw 252 innings and I kNOW HOW TO WEAR A UNIFORM! I threw 11 complete games and I dont need help getting dresst!
I DID NOT WANT TO WHERE A JACkET! I LOOK LIKES A DORk!
You are the wurst parents in the entire Earth and universe. I am so mad and Bobby Bailor said I was a Momma’s Boy.
So I had to leaf. I hope your happy. YOU WILL NEVER SEE ME AGIAN!!!!!
Davey
p.s. Please remember to feed Scraps. Also, can you bring over my light blue pajamas? Leave them on the porch and I will get them.
p.p.s. Goodby forEVER!!!!
Scoring: CS 3-5
Posted by Uglee Card at 12:00 PM 1 comment: