he slices, he dices 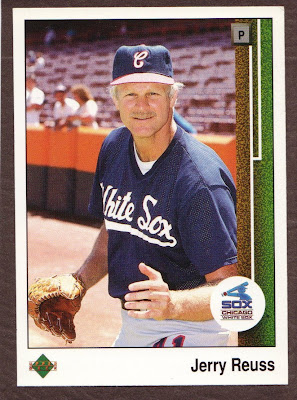 Player: Jerry Reuss
Card: 1989 Upper Deck #151
Errors: Pants number. Is that ear hair? Picture taken during mass evacuation of stadium. Baseball player completing karate chop.
Comments: The fact that Jerry Reuss (pronounced "mil-ler") pitched for more than 20 years in the big leagues is a testament to his durability, attention to detail and strict fish-head diet. Though frequently overshadowed even on his own team, Reuss was a steady presence in the rotation, earning appearances in two All-Star games and tossing a no-hitter in 1980. Plus, he was the second pitcher ever to win 200 games without winning 20 in a single season.
Despite that success, tragically, Reuss will always be best remembered for 1988, when he put together one of the most unusual statistical seasons in Major League history.
While baseball historians and Billy Crystal have debated for years what led to this bizarre anomaly - Alignment of the stars? Weak minor league development skill programs combined with a gradual expansion of the left-side strike zone? Too much steak? - it's probably best to let the stats speak for themselves. Then you, the fans, can be the final judge.
1988
JERRY REUSS * P * WHITE SOX
h: 6-5 * w: 227 * h: L * t: L
b: 6-19-49 St. Louis, Mo.
Wins: 13
Losses: 9
Earned run average: 3.44
Games: 32
Complete games: 2
Wood boards: 6,575
Bricks: 876
Shut outs: 0
Sleeper holds: 18
International spy assassinations: 1
Saves: 0
Innings pitched: 183
Runs: 79
Put him in a body bag: Yeah, Johnny, yeah!
Earned runs: 70
Subscriptions sold to Teen Kick, the magazine for young ninjas: 7
Hits: 183
Wild pitches: 3
Viper strikes: 5
Hit by pitch: 3
Belts: red, mauve, black
Walks: 43
Strikeouts: 73
Scoring: 2-1
Posted by Uglee Card at 12:00 PM 8 comments: 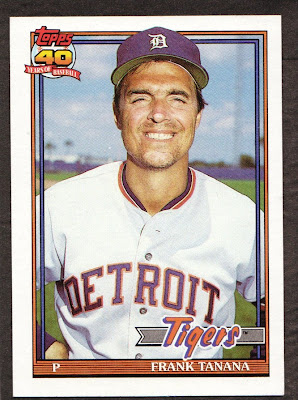 Player: Frank Tanana
Cards: 1991 Topps #236, 1990 Donruss #180, 1991 Fleer #354
Errors: Player may be unable to see home plate through his tiny eyeholes. Player's hat contains unnecessary storage space above head.
Comments: By all accounts, Frank Tanana is a nice guy. There are no stories of him berating the media or having off-field go-kart incidents. In fact, just the opposite: he's apparently a model citizen. 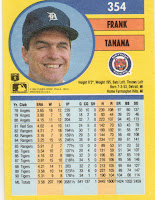 And he was pretty good ballplayer, too. Mr. Frank Daryl Tanana won more than 200 games, struck out over 2,700 batters and tossed 34 shut outs - top 100 in all three categories lifetime.
So, here's what we, the fans, want to know: What the heck did Frank Tanana ever do to baseball card photographers?
When you see the first card - pictured above - you might think, "Hey Mr. Topps Photographer, try not to position your players staring directly into the sun. I know you're taking lazy, cheesy spring training photos, but don't humiliate a flame-throwing-turned-crafty-veteran-three-time-all-star pitcher, bro."

If it were one card, it might be an accident.
But then how do you explain these other two? You can't.
For some reason, the members of the Major League Baseball Card Photographers and Bullpen Catcher Organization (MLBCPaBCO) banded together in an effort to embarass Mr. Tanana.
The question facing us is: Why?
Was he giving secrets to the Russians? Did he put a Phillie Phanatic head in their bed? Forget to show up for the post-season MLBCPaBCO picnic? Is this Manny Trillo related?
The card-viewing public demands answers!
We will file protests! We will write letters!
We will call Congressional hearings! We will call Congressional smellings!
We will picket!
Oh wait, Saturday Night Live is back on? Never mind.
Scoring: 5-3
Posted by Uglee Card at 12:00 PM 6 comments: 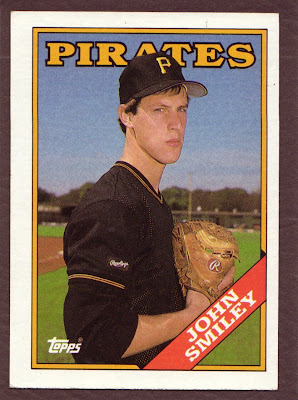 Player: John Smiley
Card: 1988 Topps #423
Errors: Player fails to live up to last name. Player is apparently throwing pitches from outside the foul lines, a violation of Major League rules. Player was given uniform without team name or number, also a violation of Major League rules.
Comments: Listen up, baseball babes. John Smiley wants you to know something.
Pitching in the major leagues is serious business. There's no doubt about it. On some days, it can be deadly serious.
That's why John Smiley likes to scowl. Sometimes, he'll stand in the locker room for hours just working on his frown. Once, in the minor leagues, he injured himself during a 12-minute glowering.
But that doesn't mean when he's off the mound - when he's away from the diamond battlefield - that John Smiley doesn't appreciate the softer things in life.
John Smiley likes walks on the beach. John Smiley can appreciate the beauty of America's many national parks. John Smiley enjoys monogrammed golf balls.
So, all you fine home-team honies out there, have a great Valentine's Day. Enjoy the chocolates, the candlelight dinners and the sweet nothings.
But never forget that the next day (and every fifth day following that), John Smiley will be back to the task at hand: glaring batters to death.
Scoring: 3-6-3
Posted by Uglee Card at 12:00 PM 5 comments: 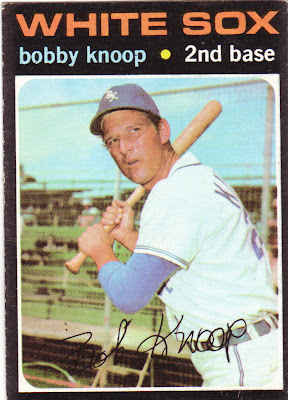 Player: Bobby Knoop
Card: 1971 Topps #506
Errors: Playing in front of one (blurry) fan. Player wearing a light blue uniform, with matching belt. Player wearing long sleeve shirt at spring training.
Comments: Facts: Patient is Major League baseball player. Came in to office today (8/5/70) complaining of declining batting average, reduced power. Feels inadequate at the plate.
History: Player started career with California Angels, finishing 24th, then 18th in MVP voting in his second and third seasons. Those years were highlighted by a .269 average in 1965, followed by 17 homers and 11 triples in 1966. Last year, patient batted just .229 with only 5 home runs. Gold Glove fielding remains unaffected.
Diagnosis: In this physician's opinion, patient is suffering from TBS, also known as Tiny Bat Syndrome. Patient appears to be using a Little League bat, or possibly a novelty giveaway bat, during actual Major League games. Tiny bat leaves patient unable to reach any pitches thrown over outside part of the plate. On the rare occasion when player did make contact, bat shattered and splinters blinded opposing catcher Ray Fosse.
Recommendations: Drink plenty of fluids. Get plenty of rest. Take ibuprofin for any pain or fever. Do not operate heavy machinery. Borrow regulation Major League baseball bat from teammate Bill Melton (3B) or Carlos May (OF). Physician does not recommend borrowing bat from Gail Hopkins (1B). May substitute. No refills.
Scoring: F4
Posted by Uglee Card at 12:00 PM 2 comments: