in the event of my demise 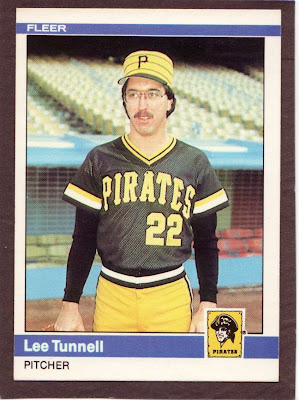 Player: Lee Tunnell
Card: 1984 Fleer #268
Errors: I hope that glove is keeping your fingertips warm because it’s certainly not going to help you catch any baseballs. Player got yellow fever; he got it bad. Player is considering renting that gap in his mustache.
Comments:
To whomever finds this missive,
I write this from a prison both metaphorical and physical. More than 497 days ago myself and 24 other men were taken, under duress, by a surprise attack during our national anthem.
We were grabbed, blindfolded and taken far from our homes. Since then, our days have been long. We have sustained ourselves on a diet of tobacco, chewing gum and powdered Gatorade.
Our captors - who wear large hats, earrings and eye patches - forced us to engage in ridiculous and humiliating rituals involving other tribes. First, we are required to wear the costume of the American bumblebee. (The picture included was smuggled out in a rear cavity by a fellow prisoner - a man named Marvell.)
Once we are dressed, we pick up sticks and swat hopelessly at white balls thrown perilously close to our head. This has gone on for months, day and night.
And things are getting worse. Three weeks ago, a prisoner only known to us as “Tekulve” was eaten. Just yesterday, another prisoner, who called himself Rhoden, tried to escape. The guards caught and gave him "The Zimmer." We were too scared to ask what that was - afraid our spirits would break for good.
By the time you read this, I may already be dead, or worse: traded. If I have gone to be with the Great Umpire in the Sky, please know that I leave my collection of black sleeves to my mustachioed patriot, Dale Berra.
If this reaches you, send troops. We are being held in a sports arena at the center of what we can only surmise is a large Midwestern city. Look for the land where three rivers meet and the average temperature is 17 Fahrenheit degrees at night, 28 when the sun is out. If you discover our location, ask for a guard named "Candelaria" who seems to express some sympathy for our cause.
God speed,
Lee Tunnell #CR 567
Scoring: 3-6-1
Posted by Uglee Card at 12:00 PM

Tears streaming. Cheeks aching. I may have pulled a muscle trying to keep coworkers from hearing me laugh.

I really liked this one!

Is it just me or does he look like Kip from Napoleon Dynamite?

awesome.
plus, that's dodger stadium in the background!

This is the best card I have ever seen in my life.

Superb post, we enjoyed each and everything as per written in your post. Thank you for this informative article because it’s really helpful, I really like site.
Please visit our website : Packers And Movers Mumbai

Amazing article. Your blog helped me to improve myself in many ways thanks for sharing this kind of wonderful informative blogs in live. I have bookmarked more article from this website. Such a nice blog you are providing ! Kindly Visit Us Packers And Movers Bangalore