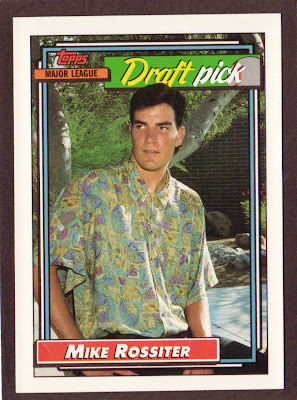 Player: Mike Rossiter
Card: 1992 Topps #474
Errors: Player sent in senior picture for Major League baseball card. Player's attention was diverted from camera by some suh-weet honies walking by.
Comments:
Baseball card autopsy 1992-474. Starting time of card autopsy is 19:34. Card autopsy performed at Alameda County Medical Examiner's Office. Card autopsy conducted by Alameda County assistant deputy coroner Ken Mackenzie, badge #456TR89.
The card is that of a 1992 Mike Rossiter, an unbent regular edition card weighing 2 ounces and measuring 3.5 inches in height.
The card is dull, with a nondescript "Draft Pick" label that fails to indicate which round he was selected or by what team.
Card is cool to the touch, almost too cool. Card features player wearing a totally rad multi-colored shirt made fashionable by Miami Vice villains and the homeless.
The statistics on the back are symmetrical and show no masses or injuries. The trachea is in the midline. The hips are symmetrical and are free of scars. The lower extremities show no evidence of trauma.
The back has a significant abnormality. Two branches of a tree, possibly oak or elm, have sprouted from the back, about seven inches below the shoulder line.
In this medical examiner’s opinion, card's cause of death is attributed to a horrid fashion sense complicated by dense foliage growing from player’s back.
Scoring: FO2
Posted by Uglee Card at 12:00 PM

Additional info about captain cooks slots 2019 on this gambling site. Read the full reviews and play.