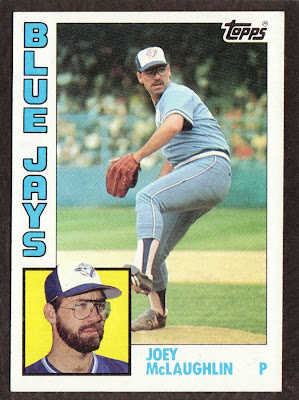 Player: Joey McLaughlin
Card: 1984 Topps #556
Errors: Player woke up late, wore his light blue pajamas to the game. Player may have stolen Tom Henke's glasses. The promotion for tonight's game: all blurry fans half price. Player has a finger sticking out of his glove!
Comments: Fellas, how often have you gotten drunk, shaved your head, then had to show up bald at the construction site for six weeks? Ladies, that bad perm you got at a discount salon - should it really take two months before you can straighten your bangs again?
For years, men and women have suffered with slow growing hair. Well, never again with Insta-Shag!
Hair help has arrived and it's fast!
Insta-Shag guarantees to grow your hair 4,000% faster than normal. Using our patented microfibers and the latest in biomedical chemistry engineering we can have you hairy in less than an hour. It's that fast!
How do we do it? Our scientists worked for almost a month to find the perfect blend of natural ingredients and powerful chemicals. It uses the most innovative follicle acceleration compounds allowed under international treaties. Just rub Insta-Shag onto any area that needs growth, then wait for the hair to pour out. (Warning: wear gloves or your palms will be too hairy to hide! It's just that powerful!)
Don't believe us? Maybe you'll take the word of Major League pitcher Joey McLaughlin:
"On May 30, we had a big game against the Detroit. We were tied for first place and needed a win. (Manager) Bobby Cox called on me in the eighth inning, with the team up 2-0. I pitched great, striking out Herndon, Parrish and Wilson. When we scored two more runs in the top of the ninth, coach took me out. Everyone thought we had the game clinched!
But the Tigers scored four in the bottom of the ninth to tie up the game! Coach was stuck because we had no pitchers left. Dave Stieb was at his daughter's communion. Doyle Alexander had pitched the night before. Jim Acker had been attacked by a bear two nights earlier, and the trainers weren't ready to test his arm.
That's when I remembered I had some Insta-Shag in my locker. I ran into the clubhouse, rubbed some on and within three minutes I had a fully grown beard! Cox put me in again, telling the umpire my name was Moe JaGaughlin. Thanks to Insta-Shag they never knew the difference! Whitaker popped out, then after walking Gibson, I got Herndon and Cabell to ground out. The ball that Cabell hit was so covered in hair, it barely cleared the pitcher's mound!
We were in first place. I got the win, but Insta-Shag gets the save! Thanks Insta-Shag!"
Still don't believe us? Try Insta-Shag for three months and if you're not completely satisfied will send you another month's supply - absolutely free! Where else will you find that?
Insta-Shag can also be used to grow hair on dogs, turtles, Corvettes or bicycle racks. It is available in most Oscos, CVS stores and Hallmarks.
You'll soon be able to try Un-Shag, our hair growth inhibitor, which puts a burn so severe into the first three layers of skin you'll never grow hair again! (Use only under doctor's supervision. May cause death in rare instances.)
Scoring: 9-6-2
Posted by Uglee Card at 12:00 PM