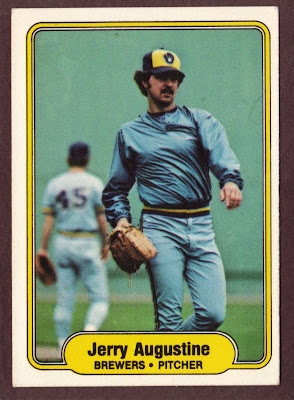 Player: Jerry Augustine
Card: 1982 Fleer #133
Errors: That's either a mirror, or a small ghost player in the haze. There's a finger sticking out of that guy's glove! Cool spacesuit.
Comments: In the future, baseball will be a very different game.
The players will literally float between the bases and can be tagged out, forced out, or beamed up.
There will no more human umpires, only computers that call balls and strikes, safe or out. Also, the computer umpires will have the power to kill.
Women will play alongside men, but only in the National League West.
After Android Bud Selig legalizes all performance enhancing substances except for pancake batter, 14 players die from injecting pancake batter into their arms.
Ads will be digitally superimposed on the hats of all spectators in the first six rows.
Fans will still be allowed to keep foul balls that go into the stands, but anyone who catches a foul ball will be charged a $4.50 recipient's fee by Major League Baseball.
Players will all wear light blue, one-piece space uniforms with tiny yellow belts.
Any celebrity who has a movie coming out with expected box office of more than $300 million (U.S.) will recieve one at-bat during interleague night games.
The home run derby will no longer be a long ball contest. It will literally be players running home, trying to escape the killer robot umpires.
Scoring: FO7
Posted by Uglee Card at 12:00 PM