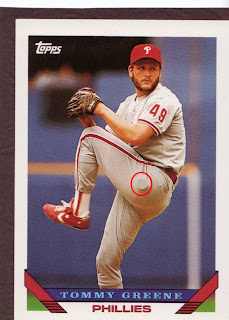 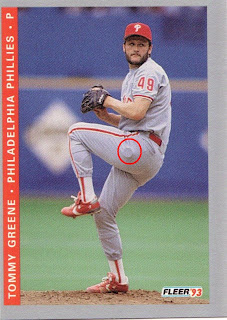 Player: Tommy Greene
Cards: 1993 Topps #291, 1993 Fleer #489, 1993 Score #464
Errors: Cramming giant player onto tiny card. Encouraging kids to chew the non-wacky tabacky.
Comments: Remember how your Little League coach told you chewing tobacco was just not cool?
And remember how you were like, "Don't be such a square, Coach McVeen! Brett Butler chews a pound and half of tobacco a day and he has more bunt base hits than anyone in the major leagues, Coach McVeen! So chewing tobacco must be cool, Coach McVeen!"
Remember that?
Well, turns Coach McVeen was right. Dead right.
Above, are two cards depicting Tommy Greene, the beard-growing, hard-throwing, and chew-chewing pitcher for the Philadelphia Phillies. (Butt circle emphasis added.)
Tommy Greene had it all. He tossed a no-hitter against the Expos. (Still counts.) He was ninth in the National League in strikeouts per nine innings in 1991. And he made a very sweet $255,000 in 1992. He was on top of the world.
But Tommy Greene was hooked on The Chew. He couldn't get away from The Chew. In his sleep, The Chew. At the movies, The Chew. Reading Emily Dickinson poems to elderly people at a local nursing home, The Chew. He took The Chew, everywhere...even to the pitching mound!
Look below and you will see the horrible, disfiguring results of chewing tobacco. Tommy Greene's body: bent and crumpled like a He-Man left in the sun. He's an animal, a freak! 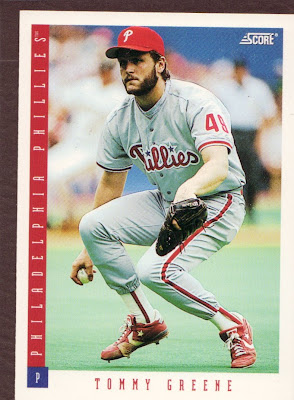 That is so sad. I had no idea he had to have chew while reading poetry to the elderly. I am glad I listened to coach Russ and stuck with Watermelon Big League Chew.

Maybe he should have that growth looked at.