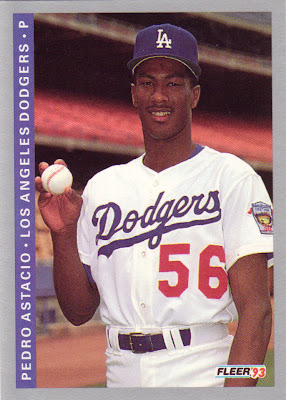 Player: Pedro Astacio
Card: 1993 Fleer #57
Errors: Stadium evacuated before picture taken. Photographer borrowed from Los Angeles County High School. Hat also borrowed.
Comments: LOS ANGELES - A day Pedro Astacio will always remember will go down in Dodger history as a day to forget. Even Vin Scully couldn't smooth this one over.
With the Dodgers uncharacteristically in last place in the National League West - more than 20 games behind the division leading Atlanta Braves - the team decided to thank their fans with a promotion unique in the annals of baseball: Pitcher for a Day.
The Dodgers announced they would hold an open tryout for the fans who attended the Sept. 18 game against the Giants. The winner would pitch the first inning Sunday, the series finale, and earn a one-inning Major League paycheck.
Out of a crew of single moms, retired Navy Seals and high school shortstops "emerged" a 29-year-old Irvine, Calif., accountant. Pedro Astacio was his name.
Astacio told reporters it was no fluke. He informed the assembled media that for the last eight years, he had been a middle reliever for his firm's baseball team - nicknamed the "Acloutants" - in the Southeastern California SubPro League.
At tryouts, Astacio hit high 70s on the radar gun. Twice.
He also hit four other people auditioning and an usher on the way to her car.
But by Saturday, the Dodgers public relations machine was working overtime hours that would have made Astacio's head spin at his day job. He was touted as "the CPA with the low ERA", the "bean counter unafraid of beanball."
Through it all, Astacio was unfazed.
"It's definitely a bigger stage, but we played some huge games in the SeCSPL, so I think I can handle it," he said, while being measured for an awkward-fitting uniform. "(Former major leaguer) Tom Burnansky played a year in the league and he only hit .319 off me. I'm ready."
An hour before the game, Astacio grabbed his lucky accounting belt and went out to warm up, as manager Tommy Lasorda threw up quietly in his office.
Astacio's first pitch was his best of the night: a ball, outside, which catcher Mike Scioscia snagged by diving to his left. It was the last pitch Scioscia caught on the fly.
Astacio got through the first inning, as the promotion had promised. His line: 22 batters, 19 runs (all earned), 10 walks, 6 hit batters, 3 home runs.
Also, 2 Dodgers infielders injured, 1 Giant batter on the 60-day disabled list, 2 fans hit by errants throws and 1 disgusted opposing manager.
"I understand this is supposed to be fun," said Roger Craig, whose team won the game 20-2. "But I got guys getting hurt because this maniac can't hit the side of zeppelin. (Catcher Kurt) Manwaring was scared to go up to the plate. I had to sit him. We're not sure when Willie (McGee) will ever be the same. Doctor said if the pitch had been going more than 50 miles per hour, he'd be dead.
"When Kevin Bass and Cory Snyder are the only guys looking forward to batting, we're in trouble," Craig said. "I offically hate the fans."
After the game, Dodgers manager Tommy Lasorda was inconsolable.
"Alston's rolling over his in grave," said the ashen manager. "I lost more weight during this game than six years on SlimFast."
As for Astacio? He was still beaming, six hours after the game.
Wearing his #56 uniform and a free hat, he held up the souvenir baseball the team had given him.
"I plan to hold it in my right hand forever," he said. "My right hand - that's the magic one."
Scoring: L4
Posted by Uglee Card at 12:00 PM

The headline alone cracked me up! You have one great site.

Sadly, I think Astacio was at or near his peak at the time of this card.

Choose your winning way at Triple Dragon Fortune slot . It's possible at 777spinslot.