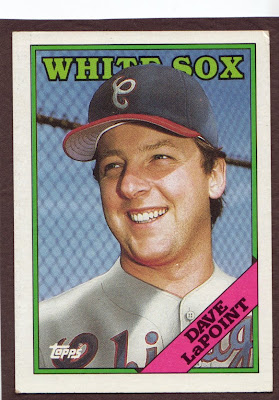 Player: Dave LaPoint
Card: 1988 Topps #334
Errors: High school yearbook photo used on Major League baseball card. Topps hired 12 photographers, but 13 painters. Player is being kept in some sort of cage.
Comments: LC: Good evening, and welcome to Card Chatter. I'm you're host Larry Chiti. Today we're going to be talking with David Throneberry, a "field recreation artist" with Topps. Do I have that title right?
DT: Yes, or field recreationist for short. I'm honored to be here. I just hope that my work - my passion, really - can bring a little bit of insight into the art of cards for your readers, viewers and listeners. Really, I'm here to learn as much as give.
LC: Okay, well, we're glad you could make it. I guess I'd like to start with your latest work. You call it DAVE LaPOINT WHITE SOX. It's...well, I'll let you describe it.
DT: Thank you for asking that vital question about what I think is a vibrant piece of art. I guess I should start by telling you how I work. For that particular piece, I spent days interviewing the friends, relatives and former lovers of Mr. LaPOINT. I was careful never to speak with the player himself. In this way, I kept neutrality in my work. If I had met him and we had become friends - traded MySpace addresses, talked about fishing - then I may not have been able to see the DAVE LaPOINT as the world sees him.
And, Lawrence, that's the point of a baseball card, isn't it? To hold a mirror up to the game, then let it reflect on the bleachers and the sky boxes? 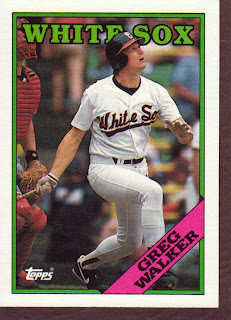 LC: Well, okay. It's just that...well, I want to show our audience another card from the 1988 Topps oeuvre. It's a Greg Walker card from the same year. It's not one of yours, but I think it shows an interesting counterpoint. Can the audience see that there?
Audience: Yes! We! Can! Wooo!
LC: Good, good. Well, I guess my point in showing this Walker card is...well, take a look at the uniform Walker is wearing. It's the home uniform, but it serves my point. Notice where the "White Sox" is positioned. Right about nipple level.
But on your recreation - one where you were detailed enough to add a prominent button - you put the "Chicago" very high on the player's chest. We can't see it here, but the 'O' would have been on his shoulder.
DT: Thank you. Thank you.
Honestly, that's all I can say - thank you.
Finally, someone who understands. That arrangement came about because of a little anecdote I picked up from LaPOINT's high school baseball coach. In talking to this man, I understood how much LaPOINT's success meant to him. So, the button represents that small-town-boy-makes-good-while-wearing-the-town's-hopes-on-his-chest-and-doesn't-lose-touch-with-his-roots-no-matter-how-big-the-stadium-is feel. There's a post-World War II life in the card.
LC: But it looks nothing like the real White Sox jersey. The hat is well-recreated, but the jersey adds details in distorted ways.
DT: Exactly. That's the challenge behind the card. That's the mystery behind playing Major League baseball. This man was traded for Rollie Fingers AND Matt Nokes. Trading men. Imagine. But through it all, LaPOINT wasn't forgotten by Glen Falls, New York, Raging Rapids head baseball coach John Cocroft. And he wasn't forgotten by Katie Williams, the Glen Falls, New York, soda girl with pink nail polish. This recreation says that. All of it. Plus some. The audience sees that in their hearts.
LC: Wow. That's all the time we have. That's all the time we'll ever have.
Scoring: 6-5
Posted by Uglee Card at 12:00 PM

David Throneberry must have had a field day with that recreationist card. The only thing that doesn't look fake is the face.

Did Gomer Pyle have a kid? That has to be one of the worst Sox cards I have seen.

I have a newfound affection for my crappy early 90's airbrushed cards. I even bought a box of 89 Topps at a local card shop for $8 in search of more. Guy looked at me like I was crazy. Whats sad is that I think I actually got ripped off...

Why does the shadow for LaPoint's head look like an alien? Or maybe it is a giraffe? And who doesn't love the water colors used by Topps?