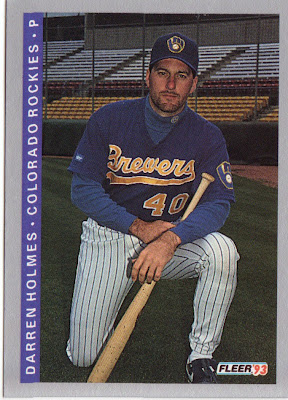 Player: Darren Holmes
Card: 1993 Fleer #412
Errors: Player was told it was a team picture, only to discover he was alone in the stadium for an intimate afternoon with the photographer. Player's Rockies uniform looks remarkably similar to Milwaukee jersey. Player staying very classy with his sporty V-neck, accompanied by matching long sleeve combo.
Comments:
Dear Darren,
It is very difficult for me to write this. You've been a fairly adequate part of my life for almost six years now. We've had some good to above-average times. Vero Beach. San Antonio. Beloit.
But something seems to have changed with you lately.
I catch you staring off into space.
You shave irregularly - and I mean that both in terms of frequency and coverage of your face. Your posture could be considered weak, at best.
But it's more than that. I didn't realize how I truly felt until I saw your 1993 Fleer card - the guy sitting next to me on the bus was using it as a bookmark for his copy of "Six People You Meet in Hell".
Geez, Darren - you're supposed to be a major league ball player. Someone kids idolize. A hero to grown men. The guy women dream of being with.
1993 Fleer says otherwise.
First of all, did you notice that you're on the Rockies now? Guess what: you got picked in the expansion draft. So what's with the Brewers gear? Grow up, Darren.
I might have forgiven you that. I might have been able to overlook a uniform slip after all our history. But you're holding a bat! A bat? The Brewers are in the American League, for at least four more years! You've never batted once in your entire career! You may as well have picked up a sword or a fireman's hose or a large mouth bass. Ridiculous.
That picture is sort of a symbol of where we went wrong. I want to face reality. You live your half-shaven, dazed, wrong-team life in Fantasyland.
I suppose you know where this is going: I really believe it would be better if we took some time off, split up, saw other people or, preferably, all of the above.
I hope you know how hard this is for me. I'm tearing up inside just trying to write this letter. But we know this is what's best for both of us. Or at least me.
So as we move our separate ways, be assured, it was definitely you, not me.
Love,
Baseball
Scoring: LO4
Posted by Uglee Card at 12:00 PM

This is hilarious... nicely done!